The kids were excited to start rowing Ping!  The last time we studied this book was when Haley was in Kindergarten (Sonlight Core A)….4 years ago!

We chose to memorize Deuteronomy 6:2 for this book.  A verse on obedience is ALWAYS a great idea!

I created a Bible Verse printable pack for this row.  You can purchase it here.

The verse tracer is a FREEbie in the Preview!

Jordan used the Bible verse puzzle throughout our time rowing this book.

We used playdough to cover up parts of the verse to help with the memorization process. 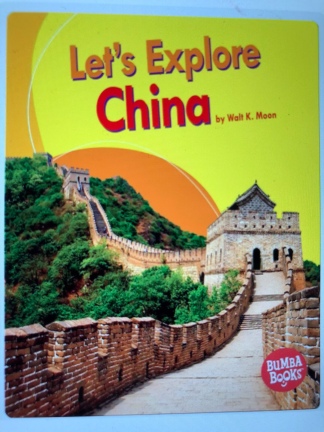 We read several books about China using our Epic app.

The boys located Asia and China on the world map.

Jordan added the Ping story disk to our map.

I added a China box in our Learning Lane along with our Montessori map of Asia.

Jordan worked on the “create the flag of China” activity (MANY times) using our Lego Duplos and Country Flag Cards.

We learned about Chinese culture and the Chinese New Year celebration.

We read It’s Chinese New Year on our Epic app and we watched Calliou’s “Happy New Year” episode on our The Story About Ping playlist.

Parker and I made a little paper lantern. 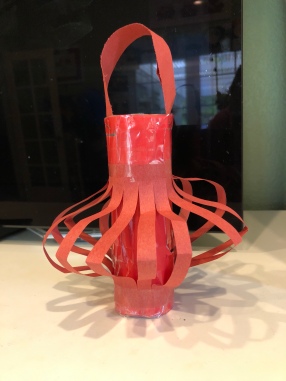 Jordan made a slightly different model a few days later.

Ping was unaware of pending danger when he followed the floating rice cake crumbs. We took this opportunity to talk about stranger awareness and discernment.

We read The Berenstain Bears Learn About Strangers

and talked about being careful around people we don’t know.

Mama Bear explained to Sister Bear that people are like apples.  Mama Bear grabbed two apples, one pretty and one misshapen.  She cut them open and found the nice one was rotten and the odd one was perfect.

We cut apart our own apple and snacked on slices while talking about being cautious around people we don’t know.

Rivers and Streams and I brought out our landmark cards and the felt river activity I made.

I read Rivers and Streams while Bub put the felt river together. 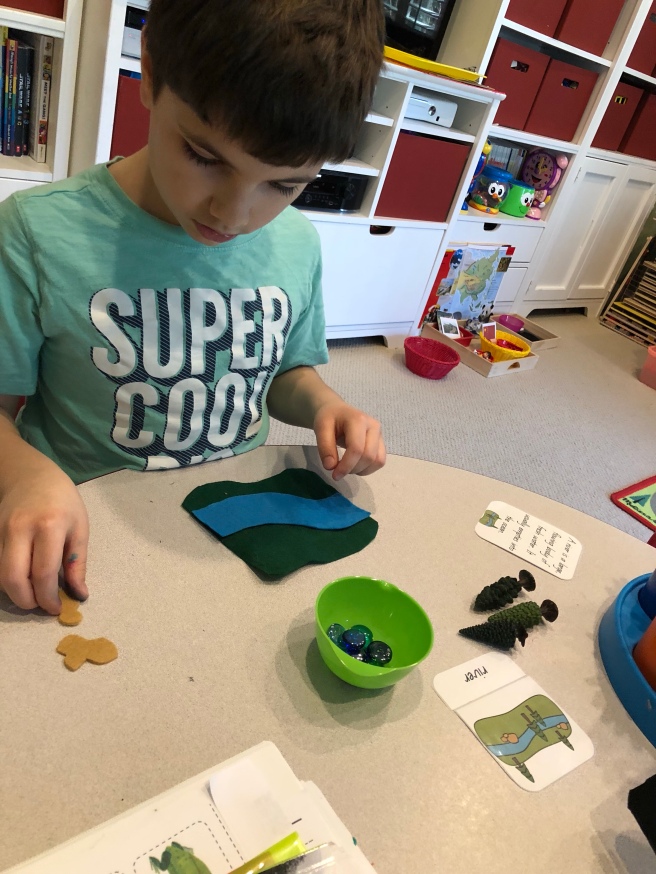 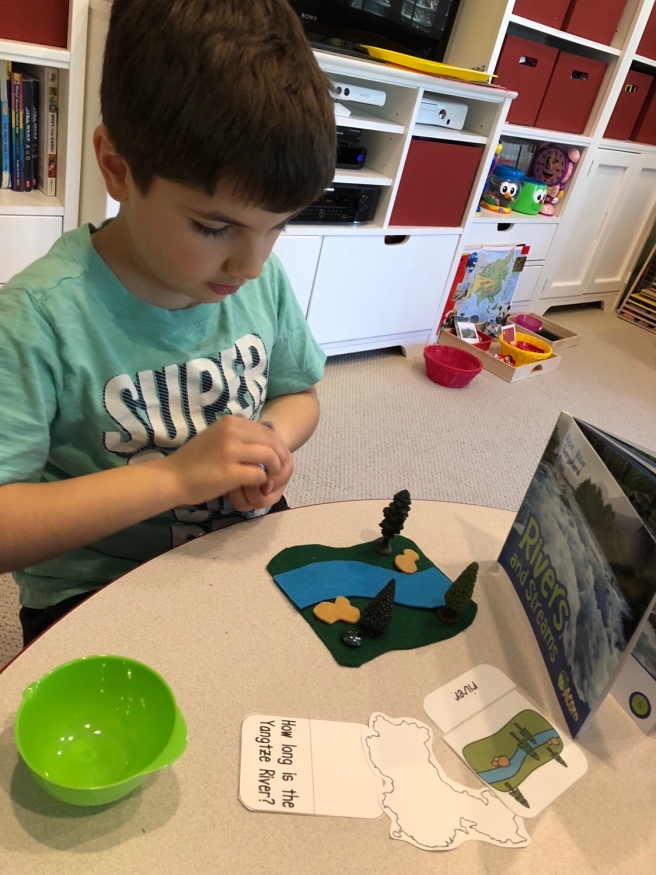 Jordan finished the river and we read about the Yangtze.

He added some Yangtze inserts in his lapbook.

I brought out some playdough and Jordan made a model of the Yangtze.

We read about the man-made canals on the Yangtze river.  Using our landform canal card, we reviewed how canals connect two bodies of water.

We “dirtied” up our playdough with herbs and coffee grounds (just for some riverbank fun) and tinted our water with yellow food coloring.

Bub poured the water and got the “yellow river” flowing.

He dug out the canal very carefully.

Then he watched the canal fill up and connect the two bodies of water.  Too cool!

I cut out construction paper eggs and ducks and wrote coordinating synonyms on them.

Parker matched the ducky words to the matching egg synonyms.

The first week I cut out duckies and puddles out of construction paper and wrote Jordan’s spelling words.

I created a spelling worksheet for Jordan to practice spelling his words.

I printed out a vowel worksheet (Royal Baloo) for the boys to work on.

The boys took turns filling in the missing vowel’s.  Some were a bit advanced for Parker, but they were perfect for Bub.

I created an ABC Fishing Fun pack last year while rowing The Runaway Bunny.  You can purchase it here. 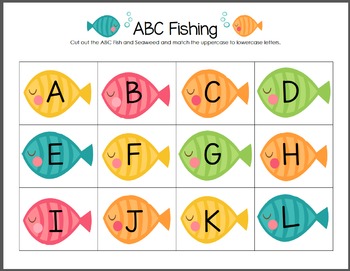 I printed our ABC Fishing Fun pack, cut out the uppercase letters, and placed them on a tray with labeled cups for sorting.

Parker sorted through the stack of letters, placing vowels in one cup and consonants in another.

I gave the boys a Ping’s Family worksheet (Homeschool Share). 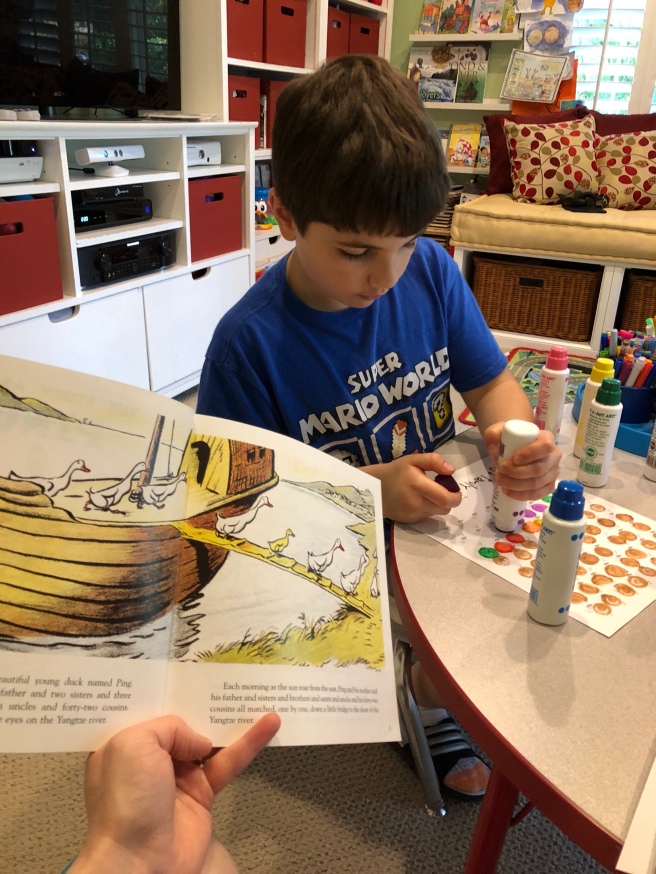 I read the first part of our story about Ping’s family and the boys colored the worksheet with dot paint.

I brought out our ducky erasers and we counted out 42 ducks.  I had Jordan make groups of seven.

We read a few books about Panda bears on our Epic app and the boys added some Panda Bear inserts (homeschoolshare) in their lapbooks.

I saw some cute Panda cupcakes on Pinterest, but I’m one to kill two birds with one stone.  We made microwave mug cakes during Parker’s Sonlight Core A science lesson and I decorated those to make Panda cakes.

They weren’t as cute the ones I saw on Adventures in Homeschooling’s site, but the kids LOVED them all the same! 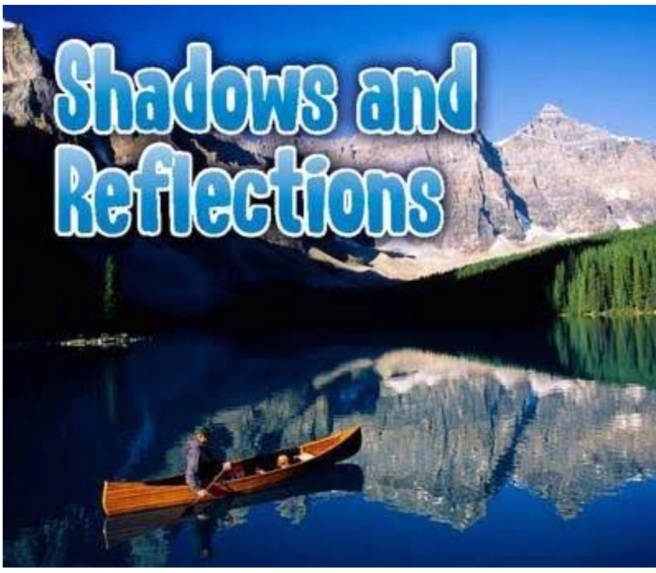 We read Shadows and Reflections (Light All Around Us)

Shadows and Reflections by Daniel Nunn.

I brought out several objects, some shiny and some dull.

Jordan was able to see his reflection in the shinier objects.

The dull objects barely showed anything.

Then we read Richard%20Scarry’s Best Storybook Ever

The Dog and His Bone by Patricia Scarry.  This was a cute story about a greedy dog and his reflection.

Then we listened to Mulan’s Reflection song that I added to The Story About Ping playlist.

We started our duck exploration with a fun ducky breakfast!

The kids watched an animated reading of The Story about Ping

The Story About Ping on our playlist while they ate their breakfast.

We read about ducks and ducklings on our Epic app.

We read Floating and Sinking (My Science Library)

and talked about what makes things float.  It just so happened Parker’s Sonlight science lesson was about boats and how they float. 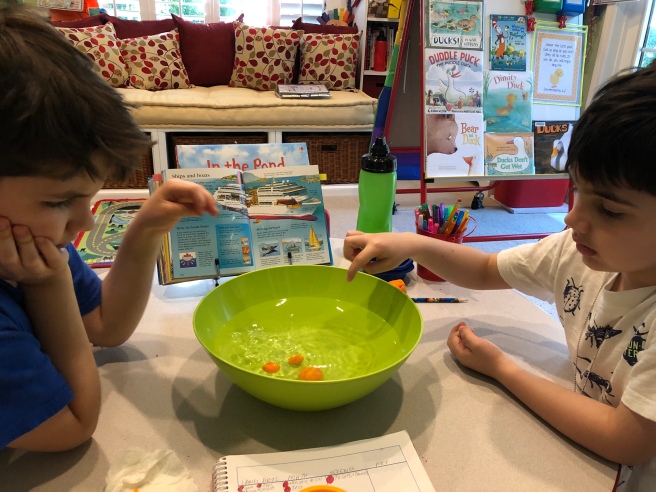 We brought out a big water bowl and did the experiment in the book.  First they dropped a ball of playdough in the water and it sank. 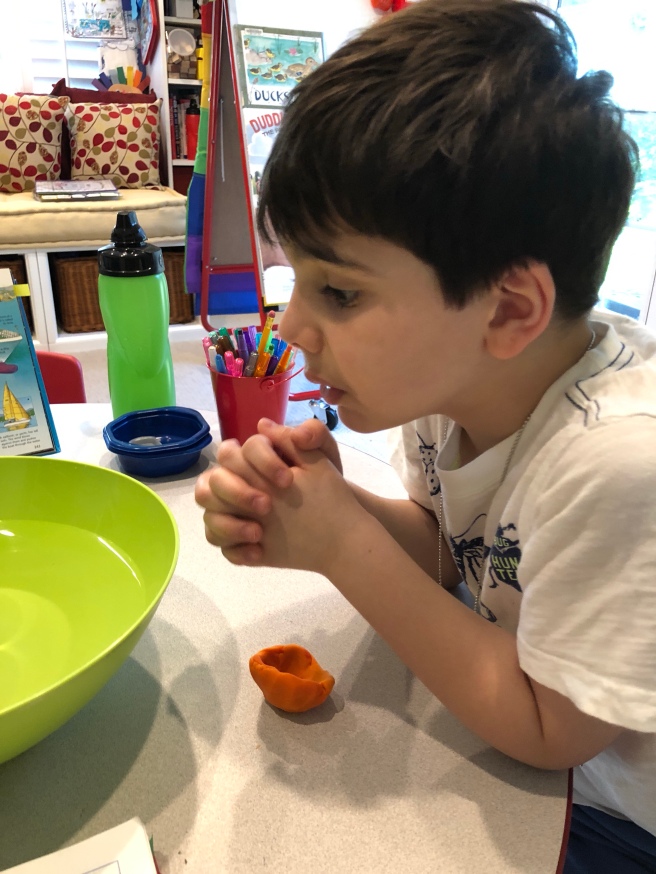 Using the same amount of dough, they made a cup-shaped boat as the book suggested.

They placed their boats in the water, but they “barely” floated.  I think they needed to be a little more of a cupped boat shape.

Parker’s boat floated a little bit better, but we saw that the shape of a boat allows it to float on the water.

Life Cycle of a Duck:

The kids went outside to play.  I brought out ducky crackers and water as a snack.

The kids had so much fun sitting around the table munching and chatting together. 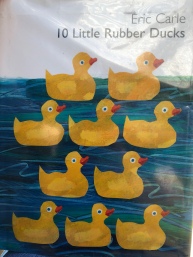 We read several fun books about ducks, but our favorite was Eric Carle’s 10 Little Rubber Ducks.

I brought out a Just Ducky lifecycle craftivity (themailbox.com) for the kids to work on.

I read The Life Cycle of a Duck to the kids while they colored their lifecycle pictures. 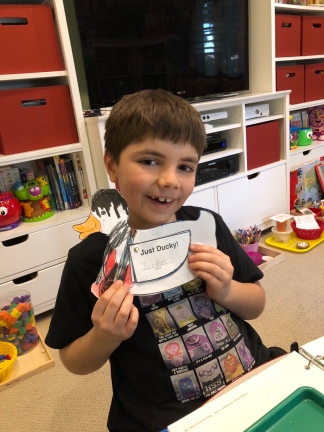 The following day we put our Just Ducky life cycles together.  They turned out really cute!

We read and LOVED Ducks Don’t Get Wet

and headed to the back yard for another science experiment.

I set out trays with paper bag duck cut-outs (another adorable idea from Delightful Learning), cups of oil, a brush, and water with a dropper. 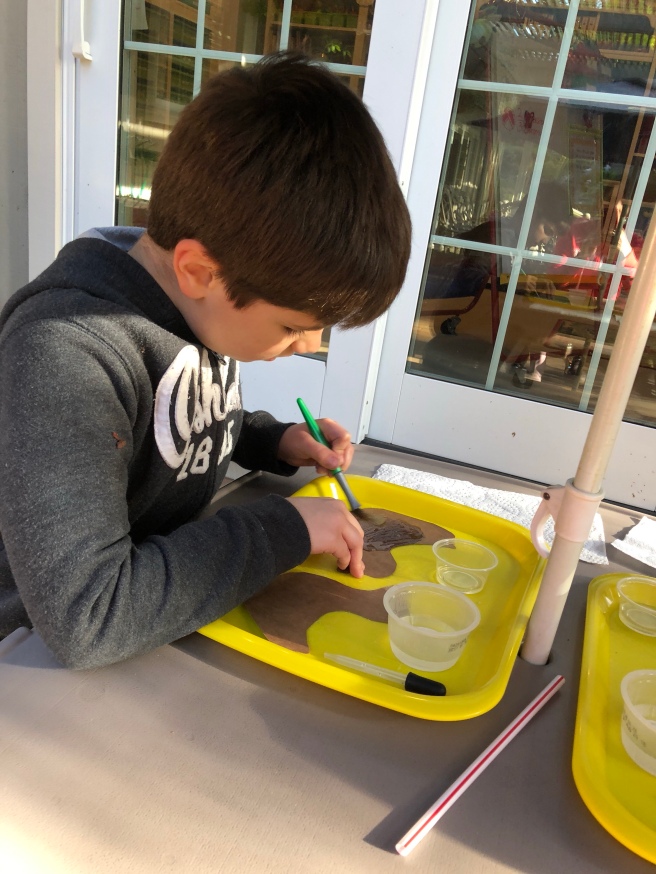 First the boys painted one duck with oil which represented the natural oily duck feathers.

They dropped water over the plain duck.  At first it beaded on top, then it started to soak in. 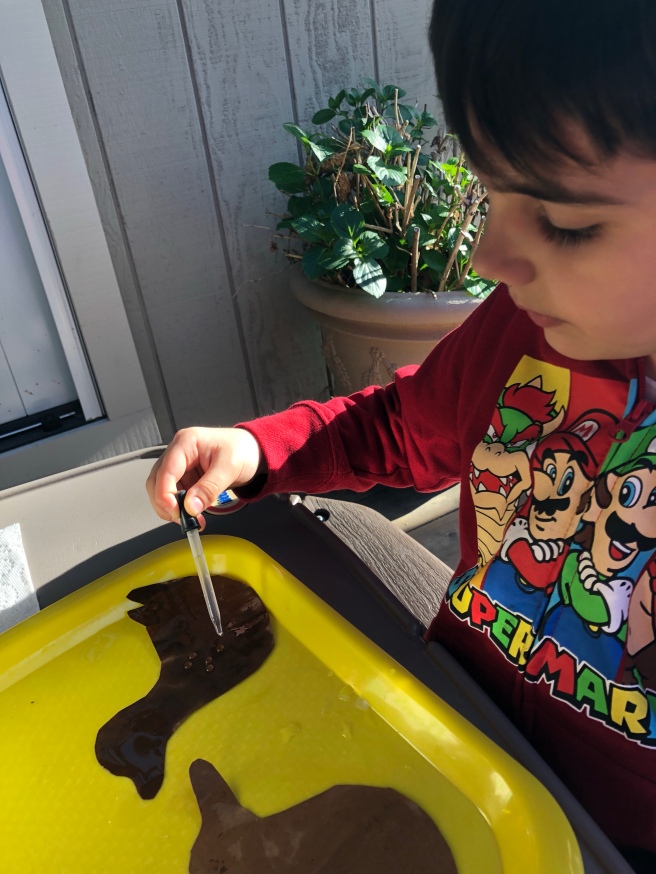 Last, they added water to the oily duck and it beaded and NOT ONE DROP OF WATER soaked through.  This was a science experiment that showed us that ducks TRULY don’t get wet!

Ducks in the Wild:

We went for a walk, sat on a bench, and read several books about ducks on our Epic app. 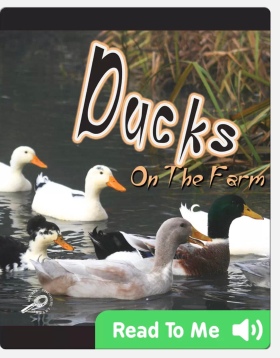 We visited a local creek hoping to see ducks in their spring habitat, but they didn’t arrive yet.

We spotted a beautiful egret though.

I found a CRAZY amount of duck picture books at our library….I may have rented them ALL!

We read duck books here, there, and EVERYWHERE!  I honestly believe you just can’t read TOO MANY BOOKS!

Jordan worked on an egg transfer tray.  He used the tweezers to move the mini white pom-poms into an empty Easter candy egg carton.

Afterwards, he made a playdough duck to sit on the nest of eggs. 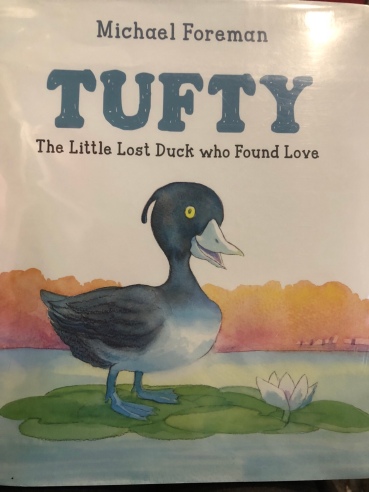 Angus and the Ducks, because it brought back memories of rowing Angus Lost during our BFIAR days!

I added a “Feed the Ducks” tray in our Learning Lane. 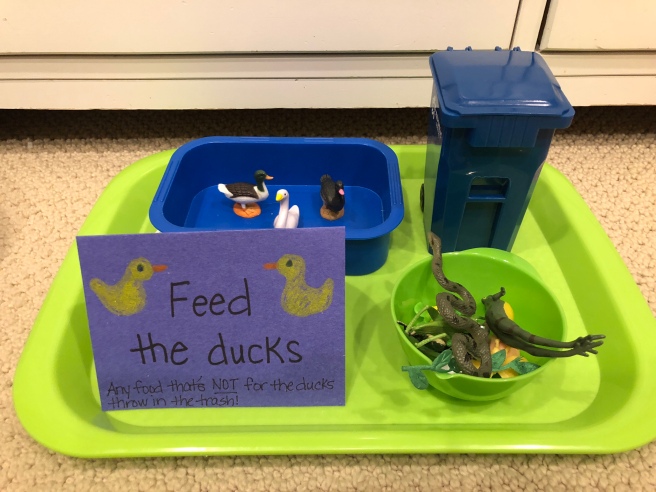 The kids had to sort through the green food dish.  They put the “duck food” in the “pond” and the rest goes in the trash bin.

The boys took turns “feeding the ducks” and had fun too! 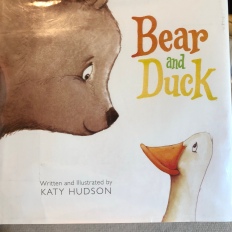 We continued to read our ducky selections…they were ALL adorable and the kids LOVED them!

Parts of the Duck:

by Gail Gibbons and I brought out our parts of the duck lapbook insert.  You can grab your FREE copy here. 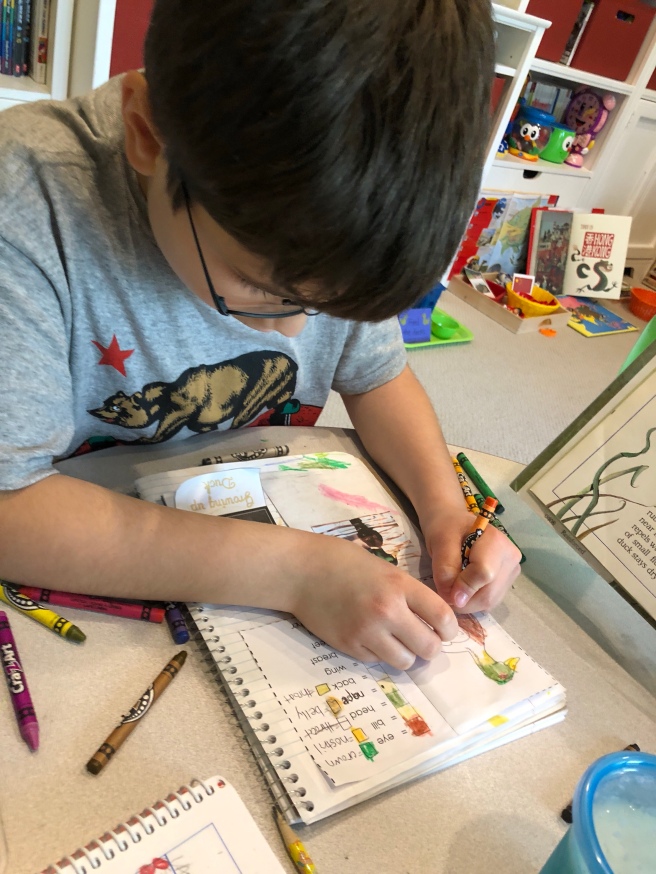 The boys color-coded the parts of the duck and added it in their lapbooks. 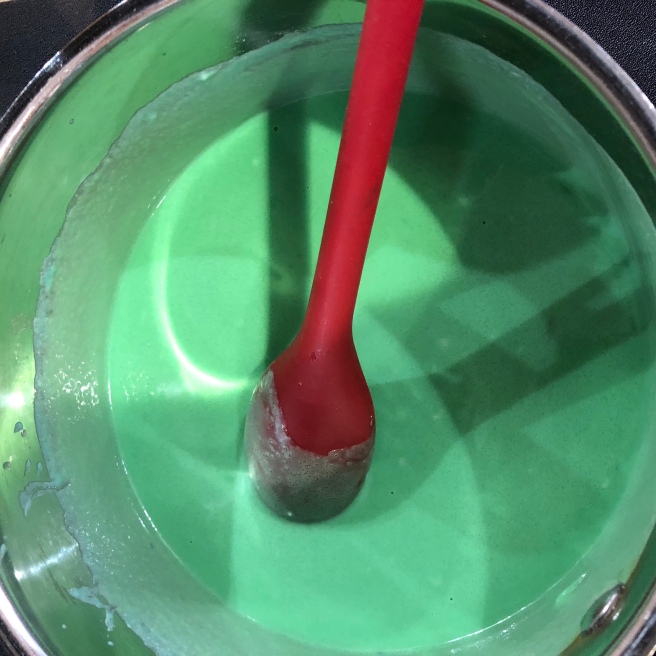 I made a fresh pot of green pond dough and brought out our pond cut-outs (Life Over Cs) we used last year when rowing Play With Me (trying to catch up on our BFIAR posts…). 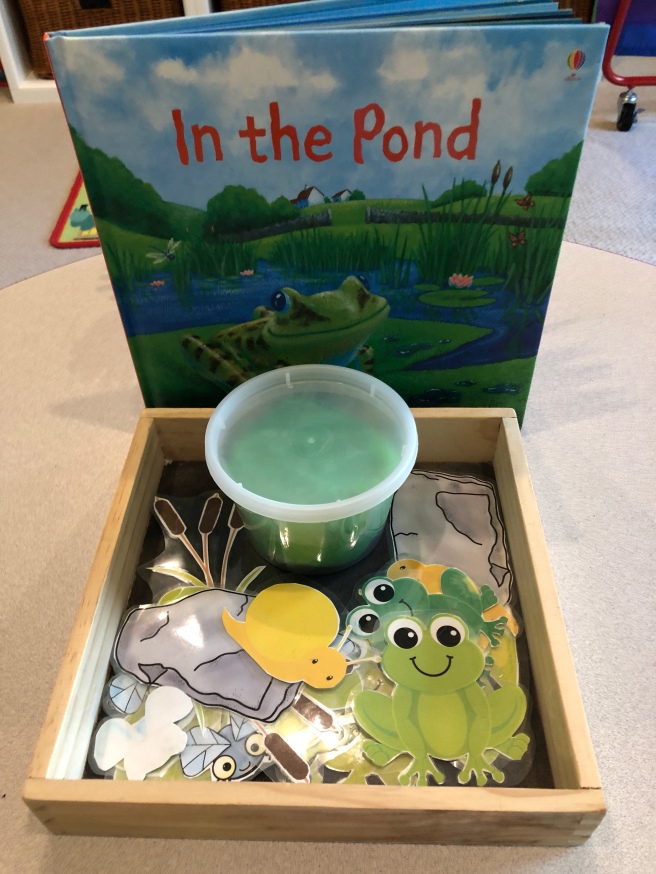 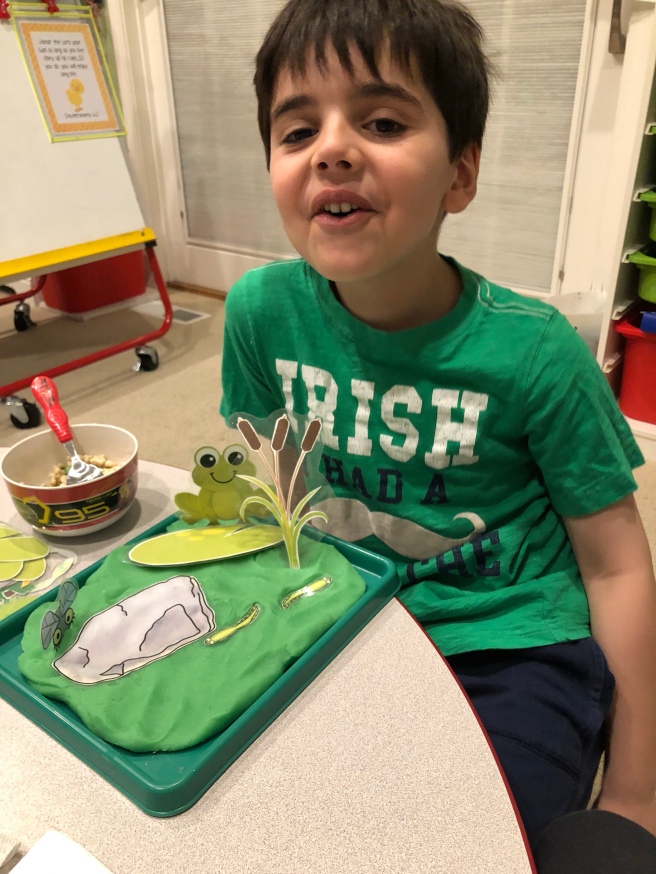 Parker was hesitant, because he doesn’t like playdough. With a little coaxing, we created his scene together. 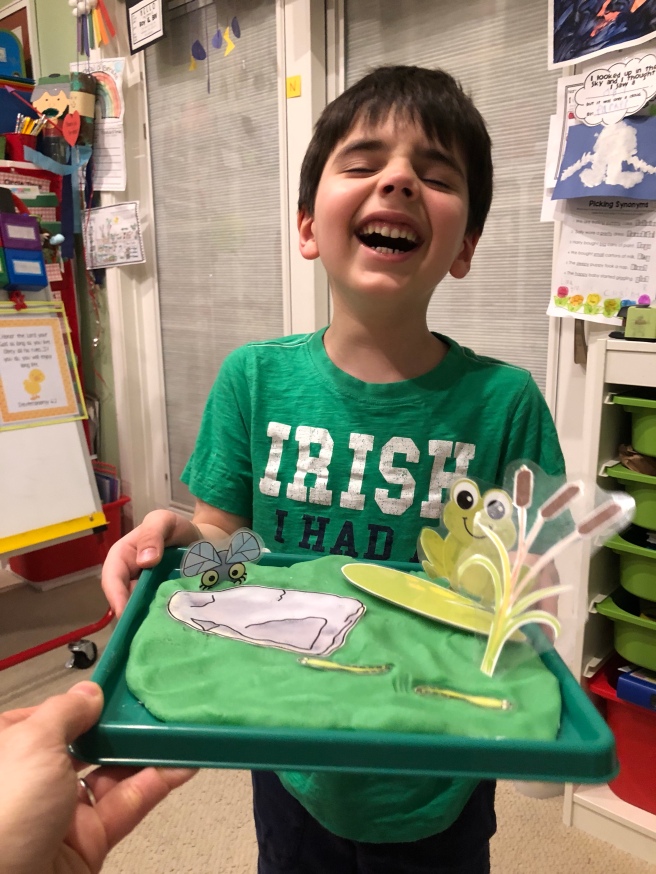 By the looks of it, I think he had fun even if it was GOOEY! 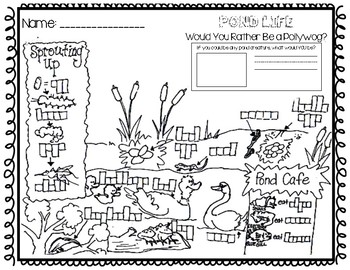 We read Would You Rather Be a Pollywog: All About Pond Life (Cat in the Hat’s Learning Library)

Would You Rather be a Pollywog? and I gave the kids a copy of our Pond Life worksheet.

The kids completed the worksheet as we read through the book.

This was another quick lesson on pond life, but it gave the kids a chance to color while listening and spelling out some cool science facts along the way!

ARTS, CRAFTS, and OTHER FUN STUFF:

Parker made Jell-O jigglers as a part of his weekly skill building activities in his Sonlight Core A program. 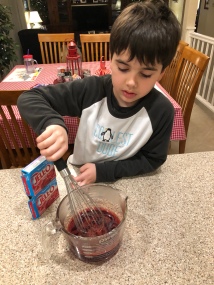 Then we decided this would be a GREAT creative writing assignment, but first they needed to gobble up these cherry PINGlings!

I tinted some whip cream with yellow food coloring, so they appeared to be floating in the yellow river (like Ping)! 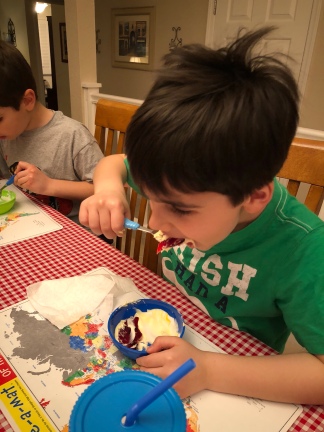 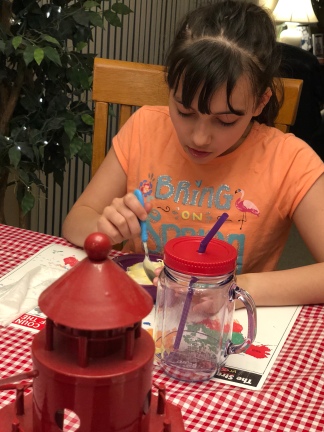 They gobbled them up! 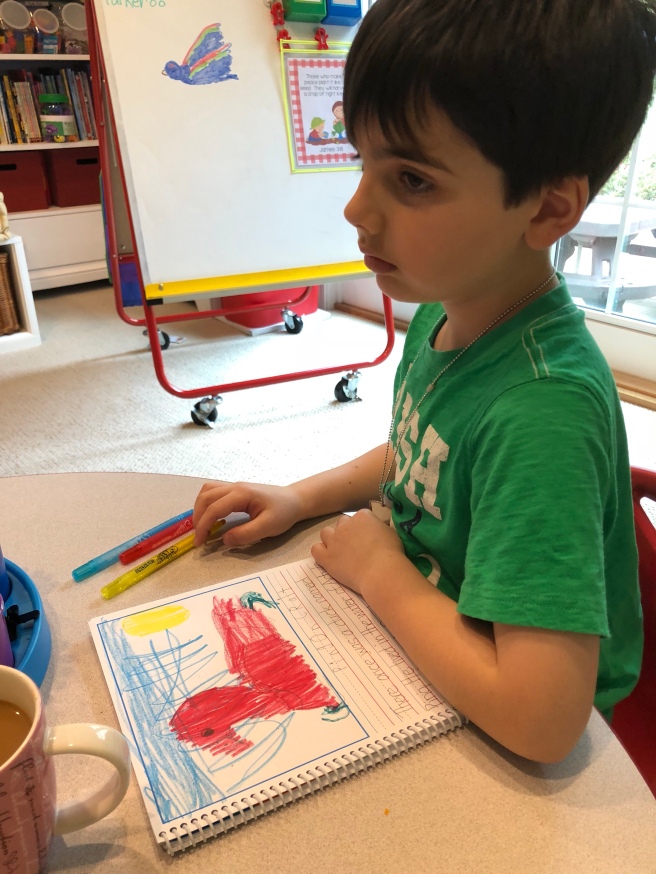 So back to our story idea…How did Ping become red???  Well, knowing this little Padawan, Star Wars was sure to be involved!  Somehow our little yellow duckling hopped on the Millennium Falcon, landed on the red sands of Crate, and the rest is history!

We read so many great books and had some fun ducky treats.  In hindsight, they could have been paired up together!

I made muddy ducks by adding chocolate pudding to a cup, sprinkling crushed S’Mores Graham Goldfish (with a couple of marshmallow fish), and some marshmallow duckies (William Sonoma).

Duddle Puck The Puddle Duck separately from eating our muddy ducks, but this would have been a great book pairing treat!

I made little duck pond treat cups with a few S’Mores Graham Goldfish, a gummy frog, a Swedish Fish, and a Marshmallow Duck (William Sonoma). 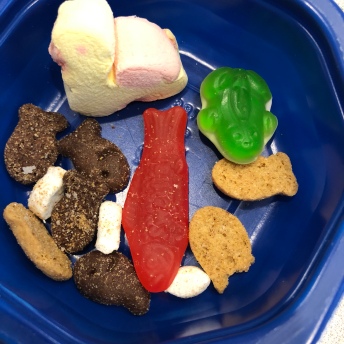 We decided to illustrate our Duck Poem (Homechoolshare) with a Rubber Ducky drawing.  This would have paired great withEric Carle’s 10 Little Rubber Ducks.

The boys watched an Art for Kids Hub tutorial on The Story About Ping playlist.

They drew, colored, and added their rubber duckies to their Ping lapbooks!

2 thoughts on “The Story About Ping”