This week we continued reading through the life of Moses. 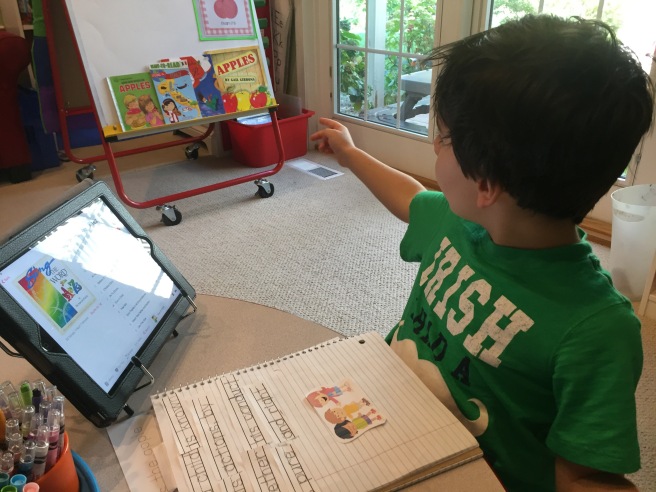 Later in the week, we cut his tracer page apart and created a puzzle to put together in his Bible notebook.

This week we read all about the Vikings.  We learned that they originated in Denmark, Norway, and Sweden.

The boys located all three countries on the world map.  By the end of the week, they were able to identify and locate 2 of the 3 countries.

We read about the Viking runes and Jordan worked on a Rune puzzle.

We read about Viking clothing and how they would spin, weave, and make clothing from wool. 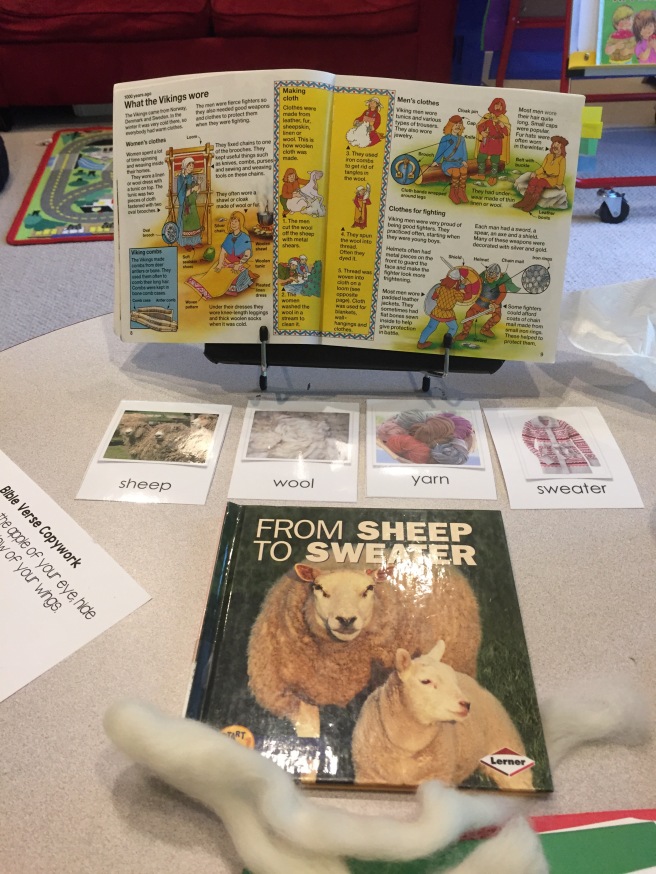 We read From Sheep to Sweater and brought out a wool sample for the kids to feel.

Jordan created a small Viking shield for his toy bear.  He painted it brown and added gold and silver details.

We read about Viking food and watched several Viking videos from our Sonlight Core A youtube list.  Jordan tried grinding wheat to flour by hand and realized how hard it really was.

Later that day, we read How God Gives Us Bread and went to the kitchen to check on the dough I made earlier.

The boys were amazed to see how much the dough had risen.

The boys loved playing with the dough.

We shaped and baked our bread rolls in the oven and had them with dinner.

Jordan and I decided to make a Viking longhouse out of poster board, craft sticks, and pipe cleaners. 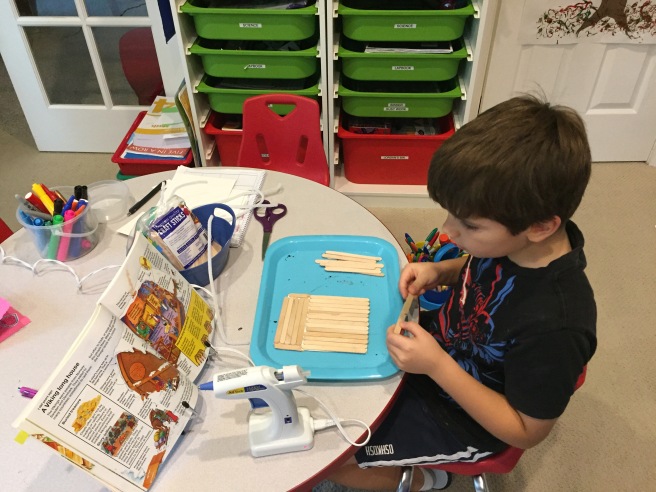 First, Jordan made a solid foundation by hot glueing craft sticks to poster board. 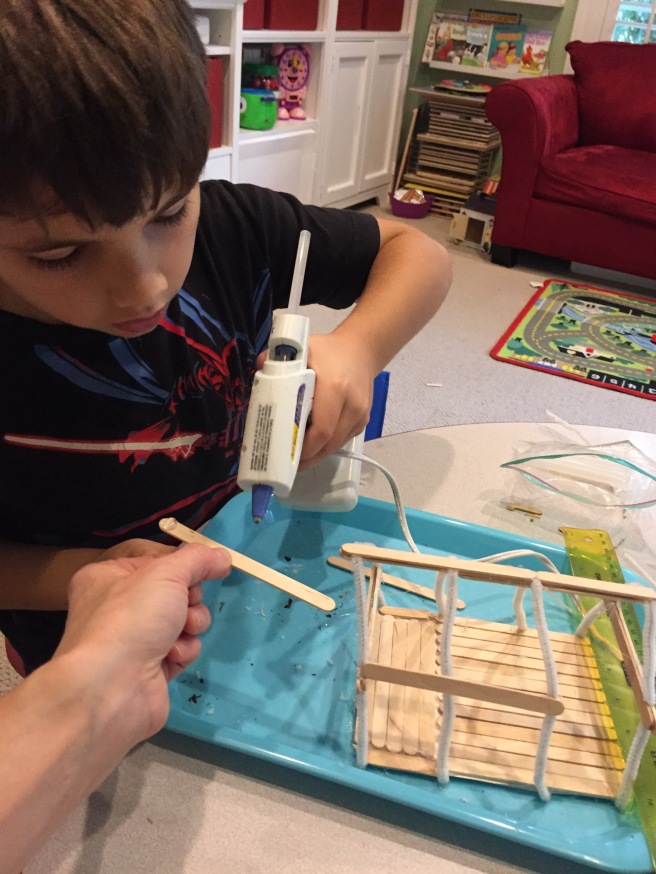 Next, we added our pipe cleaner structure and supported it with craft stick beams.

I precut poster board rectangles and used the flat side of our Mr. Sketch brown marker to simulate wood siding.  We hot glued several pieces to each side.

Lastly, we cut out a large rectangle of our poster board, folded it in the middle (like a roof top), colored it with various yellow, gold, and tan markers, painted it with gold and bronze glitter glue, and cut and pressed tissue paper strips to simulate a straw thatch roof.

It turned out adorable.  Once dry, we hot glued it down to the top.  Jordan and I had so much fun with this little project.

Parker continued his letter of the week activities. 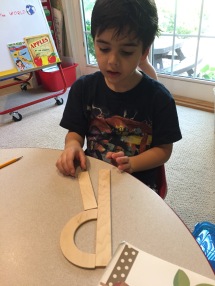 He listened to the letter “R” songs I added to our Core A playlist and practiced building and writing in his HWOT workbook.

This week we created a “R is for R2-D2” character to add to his ABC Notebook.  This was another fun one!

I brought out our Traffic Signs lapbook activity to go with the safety/traffic signs lesson from our Language and Thinking book. 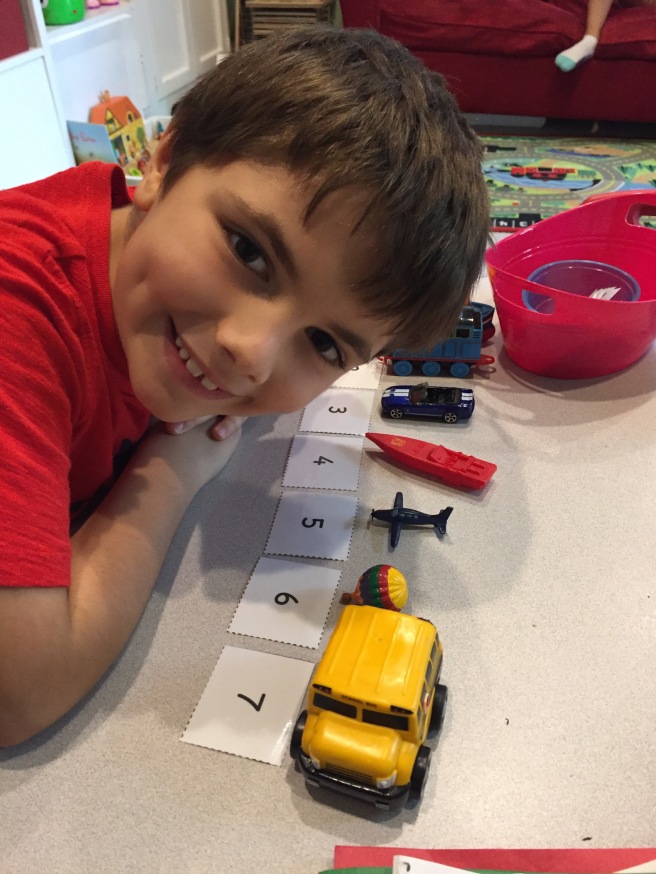 The boys also worked on a FIAR memory activity by ordering vehicle cards from our FIAR How to Make an Apple Pie and See the World story.

We brought out our Apple Alphabet Puzzles, from A Dab of Glue, and Parker matched his uppercase and lowercase letters from weeks 1-5.

Since it was the first day of fall, we went for a walk and collected leaves, bark, twigs, acorns, and the like.

We never made our fossils from the previous week, so I thought this would be a fun fall activity.

Jordan and I made a batch of fossil dough (as instructed in the IG).

I rolled the dough into balls and set them out on wax paper (8 for each child).

I set out our nature items in a wooden box and placed it on the center of the table so everyone could easily access it. 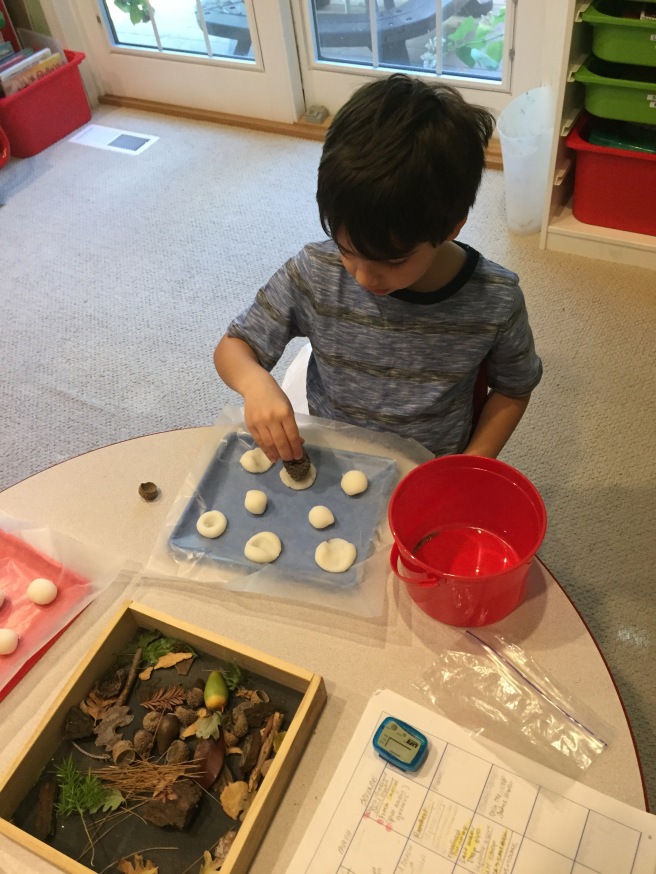 The kids made impressions of the nature items they chose and we set the trays aside to dry.

After reading about mountains in our Usborne Children’s Encyclopedia, I brought out our felt mountain scene we used while rowing The Rag Coat.

Parker put the felt scene together. 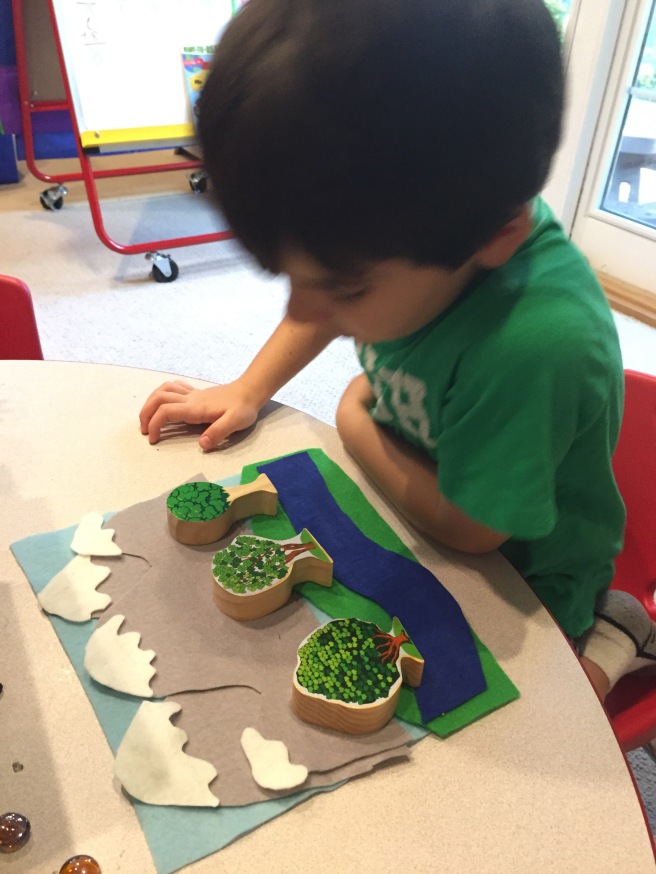 Afterwards we talked about some of the new attributes we read about (range, snow line, tree line, etc.).

This week we worked on our knife cutting skills.

I set out our apple pie dough, our learning resources play knife & rolling pin, and a “Rr is for Red” play dough mat I made. 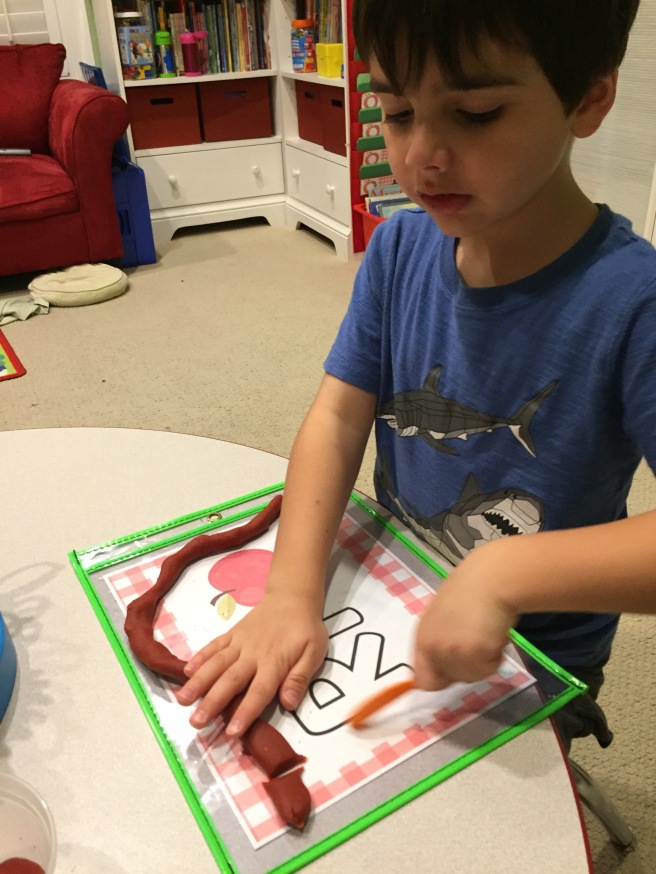 I helped him roll a long snake-like shape. 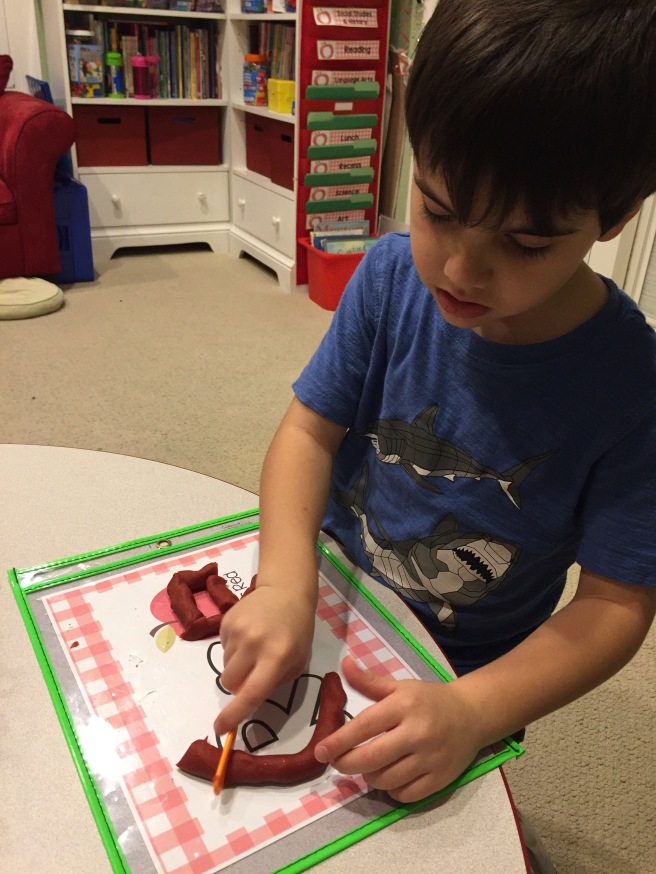 Parker worked on cutting it into little pieces. 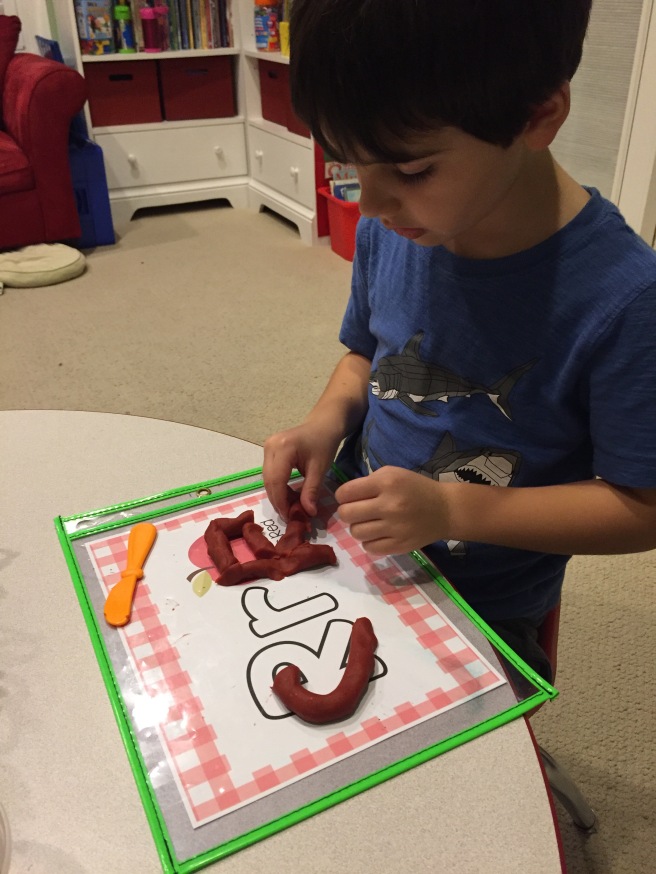 And formed his own “R” out of dough.  This was a really fun week!